Tuesday started slowly, and after work we dragged ourselves into the car. It was overcast, and we were so tired, but also excited because today was the day we were going to see the Royal Yacht Britannia. Based in Leith, HMS Britannia was previously used as The Queen’s yacht, and was a royal residence, but also had another use as a hospital ship. It’s also been voted Scotland’s best tourist attraction, so I was really excited to go!

My cousin had been before, but I never had, so I had no idea what to expect. I was tickled that my ticket was actually a ‘boarding pass’, which started the trip off well. The entire experience was impressive from the entrance; the opening exhibition was full of information and kept my interest.

Exploring Britannia was incredibly fun and it was so well set out as a tourist attraction. The audio guide is incredibly informative and easy to listen to, and helps guide you around the ship really well. My favourite part of Britannia was viewing the Royal Apartments. They were obviously designed with the Royal Family in mind, but they also felt like a home for them, instead of just a place to keep them in.

We had also been told to look out for toy corgis around the ship, so we excitedly looked out for them. There were loads, which, sadly was quite exciting for us. 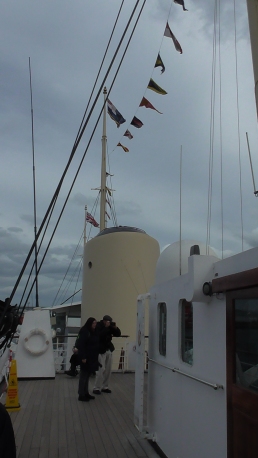 My cousin pulled me into the Royal Deck Tea Room, which was huge and beautifully set out. We were seated at a table adorned with Britannia napkins and were given a menu. My cousin ended up getting a cream tea and I had cream of cullen skink, a delicious soup filled with potatoes, leeks and haddock. We wanted to sample so much more on the menu, but we were full, and it was time to explore the rest of the ship!

We wandered around parts of the ships such as the Marines’s quarters, the sick bay and the laundry room, and were astounded at how different parts of the ship were to each other. The differences between the classes of people on the ship was obvious, and really seemed like it was designed to function as it’s own part of society at sea. The last thing I was surprised at was the size of the engine room. It was huge, and as someone who knows literally nothing about ships, it really emphasised the power of the ship.

For me, the best part of the entire experience was the enthusiasm of the staff. Everyone seemed so genuinely happy and proud to work there, and it really made the day. Britannia was an incredible day out, and for £16, it was definitely worth the money.

Writer, Film Lover, Baker. Stumbling through life one adventure at a time.